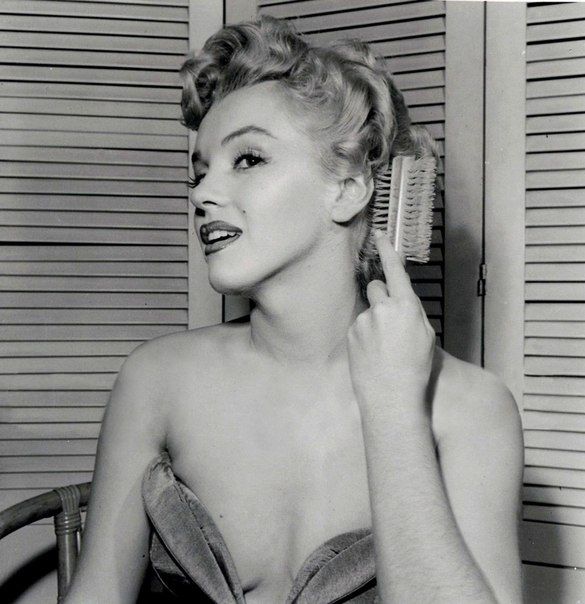 Most gentlemen who prefer blondes prefer Marilyn Monroe, and probably never notice from one picture to the next that the exact colour of her blondeness is never the same twice.  Nor do they ever seem to care if they do notice.

When one writer carpingly referred to Marilyn as the “chameleon blonde,” Marilyn felt it necessary to come to her own defense.  “The changes give me a lift, and certainly we owe it to the fans to give me a change,” she states.  “We can’t very well switch faces, but actresses can and should avoid monotony by changing the personality of their coiffeures and clothes.  It gives me a transformed feeling.”

Marilyn started out as an ash blonde in “The Asphalt Jungle,” switched to golden blonde for her showgirl role in “All About Eve,” was silver blonde in “As Young As You Feel,” amber blonde in “Let’s Make It Legal,” an smokey blonde in “Love Nest.”

They called it alabaster blonde in “Clash By Night,” topaz blonde in “We’re Not Married” and honey blonde in “O’Henry’s Full House.”  They didn’t know what to call it in “Don’t Bother To Knock,” because for her first serious dramatic role of consequence Marilyn refused to change her natural colour, a dark, golden brown.

In “Monkey Business” it’s been dubbed champagne blonde, after a phrase “butter blonde” was turned down as too yellow.  “But I prefer beer,” Marilyn points out.  “It’s really a prettier colour than champagne, but I suppose it doesn’t sound as glamourous.”  Most will agree that by any other name Marilyn Monroe is still the atomic blonde first.

Source: a vintage article circa 1952 printed in “Marilyn at Twentieth Century Fox” by Lawrence Crown.

Thelma Ritter and Marilyn filming a scene from The

Wardrobe test from the set of The Seven Year Itch

We should all look so chic while on the phone. #m

Out and about in New York, 1955 #marilynmonroe #ma

The premiere of Call Me Madam in 1953. Something c