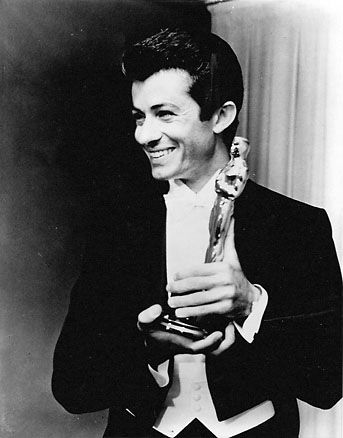 Chakiris began his film career in 1947, starting off with a string of uncredited roles as backing dancers.  His 6th film appearance saw him as one of the suited men vying for Marilyn Monroe’s attention in the now iconic musical number “Diamonds Are A Girls Best Friend” from 1953’s “Gentlemen Prefer Blondes.”

“One of my favorite credits is to say that I worked behind Marilyn Monroe and I love saying that.” George remembers fondly, “ She was phenomenal. She only about twenty six when she made that film but Marilyn was an actress who was deeply concerned about her work and was very conscientious. Let me give you an example of her professionalism: If there ever was a cut for any reason, she never went back to her trailer to check her makeup. She’d be there on her starting mark and ready for the next take.”

Eagle eyed Marilyn fans will also see him pop up very briefly in “How To Marry A Millionaire” in Marilyn’s character Pola’s dream sequence and during several musical numbers from “There’s No Business Like Show Business.”

Mr Chakiris has also been a wonderful friend to “Marilyn Remembered” over the years, speaking at various memorials, attending events and always happy to chat with his many fans.

~Marilyn on Clark Gable during their time on "The

Suddenly, everything for Pola becomes clear—lite

Marilyn adored children and was a natural when int