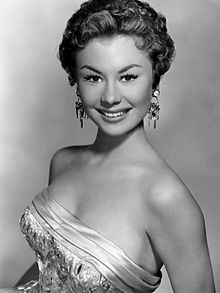 Gaynor is an American actress, singer, and dancer. Her most Notable films include “There’s No Business Like Show Business” (1954) and “South Pacific”, the 1958 motion picture adaptation of the stage musical by Rodgers and Hammerstien.

Of course fans of Marilyn’s earlier screen roles will also know that both Monroe and Gaynor co-starred in “We’re Not Married,” though neither had any scenes together.

Gaynor has always spoken very highly of Marilyn, a great example can be watched here when she was interviewed about her time working with the screen icon in 2012:https://youtu.be/_cZ2i7PL8I0

She was also once quoted as saying:

“I played Ethel Merman’s daughter in that picture and we became best friends …Marilyn Monroe played a hat-check girl in the picture, but she wasn’t around all the time. She was busy creating Marilyn Monroe. If you see that picture now, though, and really pay attention to it, you realize that Marilyn steals the whole damn picture.”

For more information on her long and varied career, visit her official website: http://www.missmitzigaynor.com